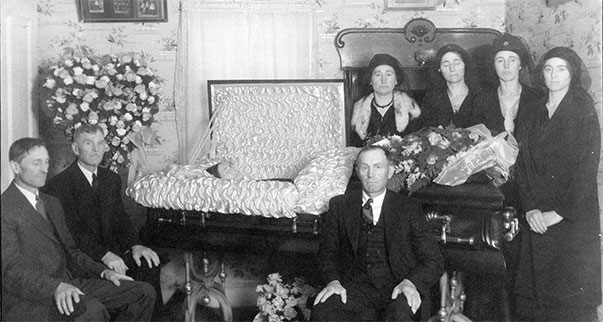 
But Not Forgotten presents a selection from the Steve and Mary DeGenaro Postmortem and Memorial Photography Collection, housed in the California Museum of Photography’s permanent collection.  Postmortem portraits, as photographs of the deceased are called, are often described in the past tense, a practice which dated to the nineteenth century that has since ceased.  This is not the case, and the majority of photographs in this exhibition date from the twentieth century.  These pictures were made or commissioned as a source of comfort in a time of grief, and were the last chance to capture the visual essence of a lost loved one.

Steve DeGenaro amassed these photographs through twenty years of scouring antique shops and flea markets, trading with other collectors, and bidding in auctions.  The DeGenaros are not alone in collecting postmortem photographs, but their collection is particularly notable for its diversity of imagery.  Collected with an eye toward the most artistic and poignant portraits, the DeGenaro collection also spans centuries and continents.  Seen en masse, the photographs illustrate a shift in mourning practices, toward the more public nature of loss, even as traditions have changed so that postmortem portraits are no longer a de facto part of death.

But Not Forgotten is an exhibition organized by the California Museum of Photography at UCR ARTSblock. The photographs presented here are a selection from the Steve and Mary DeGenaro Postmortem and Memorial Photography Collection, which Steve DeGenaro generously donated to the museum between 2009 and 2012.  These photographs, along with the images that were not included in the exhibition, are available for viewing by appointment at the CMP’s Library and Study Room.