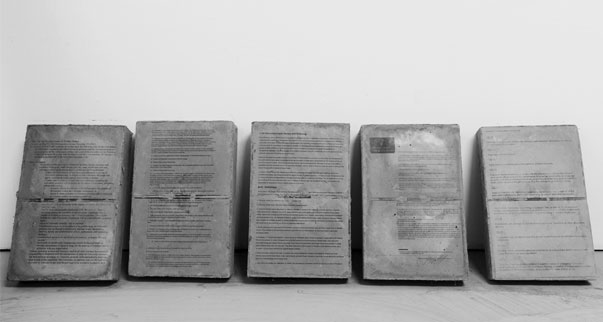 
CMP Projects presents the first iteration of U, a collaborative project that encourages a discussion about practices of resistance at institutions of higher education. A single sculpture—a concrete column reaching to the ceiling of the gallery—occupies the space alongside seven photographs by Ansel Adams, chosen from the CMP collection. The column consists of raw concrete slabs on which are printed several administrative texts, including five student codes of conduct from various American universities. “These codes of conduct,” the artists assert, “approved and modified by boards of regents, trustees, and legislators, are used to control, condense, and nullify resistance at universities and, in some places, are used as tools to expel ‘unruly’ student organizers.” The column concretizes the open-ended language of student codes of conduct into a solid rectangular stack that harkens back to the institutional critique and minimalist art practices of the 1960s and 70s. Reaching from the gallery floor to the ceiling, the documents amount to a column that seemingly offers structural support for this university-run museum.

U is an ongoing collaborative project by Ramón Miranda Beltrán, Emily Baierl, Lindsey Berfond, and Annie Shaw. As it develops, the project will include works in various media, such as the sculpture and photography presented as part of this exhibition, as well as ephemeral components, including workshops and other events. (Please refer to the press release for further details.) This exhibition is presented as part of CMP Projects, an ongoing series of solo presentations organized by Joanna Szupinska-Myers, CMP Curator of Exhibitions.