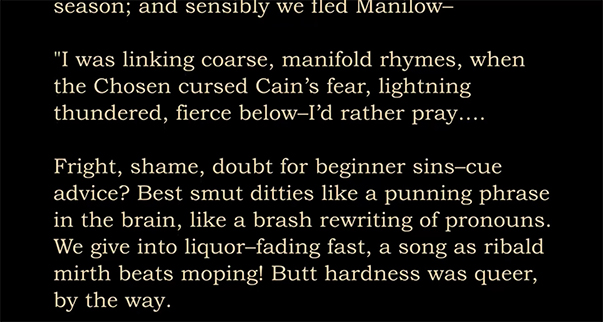 
Flash: Allan deSouza is the presentation of a fragment of the in-progress video Ark of Martyrs. Based on Joseph Conrad’s Heart of Darkness, the video presents the first five pages of the artist’s rewriting of that 1899 novel. Whereas Conrad’s original text is framed as the narration of Charles Marlow, a British sailor who transports ivory along the Congo River during the height of European imperialism, Ark of Martyrs is set at a contemporary wedding party. DeSouza’s rewriting mirrors Conrad’s syntax, and employs rhyme and alliteration: “The water shone pacifically” becomes “The daughter yawned terrifically.” The text making up Ark of Martyrs scrolls over the screen while a narrator (Stephen Wattrus) reads the corresponding passages from Heart of Darkness. According to deSouza, Conrad contrasts the present day “civility” of the River Thames, from where the story is told, with the timeless “savagery” of the Congo River, where Marlow’s story is set.

Flash! features recent photo-based works by contemporary artists and is presented on the third floor of the CMP. Flash: Allan deSouza is the fourth exhibition in the series.

Courtesy of the artist and Talwar Gallery, New York