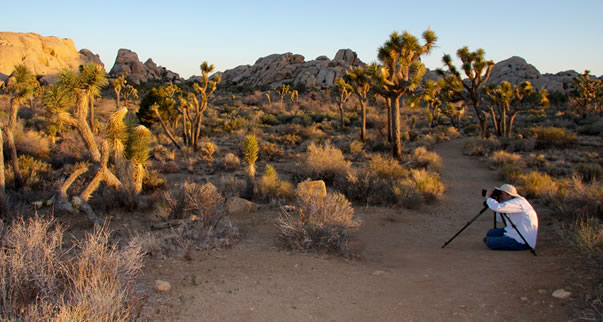 ESCAPE TO REALITY: 24hrs @ 24fps features images from over 60 photographers and based on the memoire Edge of Taos Desert: Escape to Reality by socialite Mabel Dodge Luhan. In May 2008, more than sixty photographers set out to capture a 24-hour day in Joshua Tree National Park in Twentynine Palms, CA. Taking inspiration from English photographer Eadweard Muybridge\'s important work in motion study, the goal was to capture sequential movements and the passages of time, rather than isolated still-life compositions. Each photographer was assigned a 14-minute time slot that would be assembled together into a complete video. The result, Escape to Reality: 24hrs @ 24fps, an experimental video rendered in a drop-frame style.

Joshua Tree Exhibit 2009 is a selection of classic landscapes and nocturnal images taken in May 2009 during the annual photographic excursion sponsored by the Digital Studio. The weekend actually began in Palms Springs with a conversation between Colin Westerbeck, director of UCR/CMP, and photo collector David Knaus at his home, sharing a diverse collection of desert photographs from around the world. After a provocative presentation highlighting formal concerns, the assembled group made its way to Twentynine Palms for a workshop on night photography led by photojournalist Carlos Puma. Participants were able to train their lenses on a brilliant full moon shone over Joshua Tree during the entire three days. Finally, in between forays into the park to snap pictures, photographers gathered at the Tumbleweed Gallery in Morongo Valley for a local photo show.