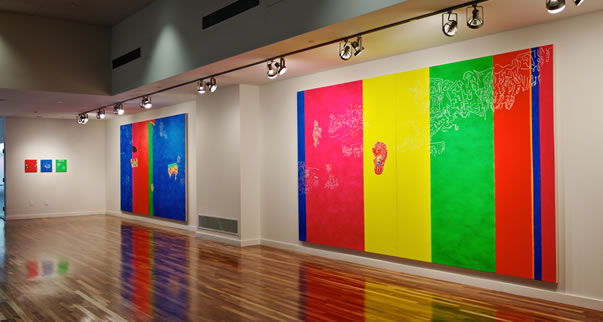 Journeys to Recover Your Future


David Leapman will exhibit an 8 x 28 foot, sitespecific, four panel phosphorescent and fluorescent painting. He uses a private language of abstracted forms that are positioned against bands of color, often using exotic materials. Leapman was born in London in 1959, and currently lives and works in Riverside, California. He studied at St. Martins School of Art, London (and Goldsmiths College, London. He was a first prizewinner in the John Moores 19 (1995), a prizewinner in the John Moores 20 (1997) and was awarded the Abbey Award Fellowship in Painting at the British School in Rome in 2003. His work has been included in many prominent solo exhibitions and museum collections in the U.K. and the United States. Organized by UCR Sweeney Art Gallery, and curated by Tyler Stallings, artistic director, Culver Center of the Arts & director, Sweeney Art Gallery.