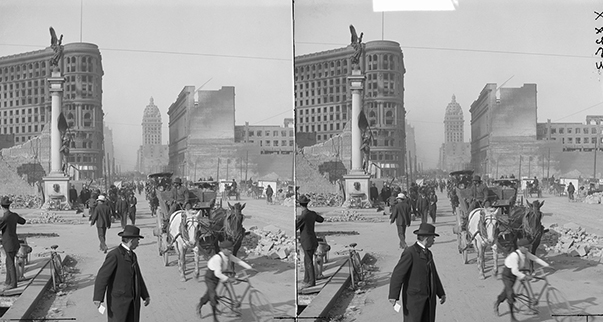 
Michael Lesy: Looking Backward looks at how the United States viewed the world at the dawn of the twentieth century. Presented in tandem with the release of Lesy’s book, Looking Backward: Images of the World at the Beginning of the 20th Century, published by W.W. Norton in conjunction with the California Museum of Photography, the exhibition is drawn from scholar Michael Lesy’s 2013 Guggenheim Fellowship, which he spent researching in the museum’s Keystone-Mast Collection, the largest surviving archive of stereoscopic photographs.The photographs featured in the exhibition Michael Lesy: Looking Backward are featured in the book. Presented in the gallery, they will utilize various stereoscopic devices that engage images’ sense of three-dimensional depth. These viewing methods include stereoscopes like one might have found in a Victorian parlor, including several historic devices drawn from the California Museum of Photography’s extensive photographic technology collections, as well as 3-D projection, like one might encounter in a 3-D movie today, and the View-Master, a stereoscopic viewer ubiquitous in the second half of the twentieth century.

The book, Looking Backward, will be sold exclusively at UCR ARTSblock until its official release in bookstores around the nation in mid-April 2017.On Saturday, March 11th, there will be a series of events celebrating the author, book, and exhibition: Lecture 4:30-5:30 PM, Book Signing 5:30-6:00 PM, and Reception 6-8 PM, free admission to all events.
Michael Lesy: Looking Backward is organized by the California Museum of Photography at UCR ARTSblock, and is curated by Leigh Gleason, Curator of Collections, California Museum of Photography. UCR's College of Humanities, Arts and Social Sciences and the City of Riverside have provided support.