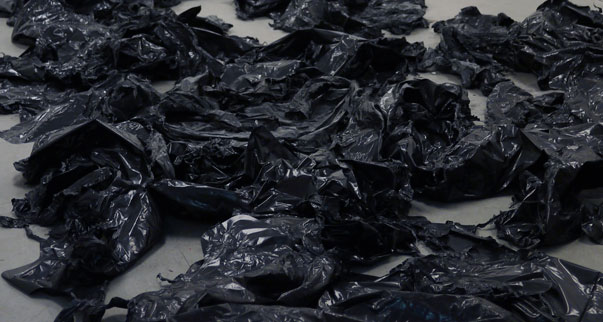 
Patrick Quan: Accidents and Failures is a multi-media exhibition at UCR ARTSblock's Culver Center of the Arts that will occupy several spaces - a first for Culver. Altogether, Quan's new sculptures and photographs are a site-sensitive arrangement of objects that engages with the Culver. On the Culver's second floor, he proposes to create a Zen-like garden of bent aluminum shards in the Hammond Dance Studio and in the Media Room, he will display large-scale photographs that will be rotated on the Culver's ground floor in the atrium. In the center of the atrium, he will create a counterpart to the bent aluminum shards on the second floor, but with shredded, black, plastic, paint-splattered garbage bags, as if to pit the forged, hard metal against the airy, ephemeral, everyday bags. Quan is interested in creating an environment that provides a platform for one to separate themselves from their consciousness through this odd combination of elements. Failure and accidents are important components in his working method. Both notions, embodied in the show's title, can lead to a "success" which can then become its own failure too. It is a feedback loop that allows the artist to explore in his work the nature of observing and understanding objects, and then providing the same investigative experience for the viewer.

Patrick Quan: Accidents and Failures is organized by UCR ARTSblock's Culver Center of the Arts, and curated by Tyler Stallings, Artistic Director, Culver Center of the Arts & Director, Sweeney Art Gallery, University of California, Riverside. UCR's College of Humanities, Arts, and Social Sciences (CHASS) has provided support. Patrick Quan is a Culver Arts Research Laboratory (CARL) Resident, an ongoing series in which artists in the literary, performing, and visual arts utilize the Culver's second floor to develop projects which are then presented to the public in a final project.

Image caption: Patrick Quan, Proposal for Installation in the Culver Center of the Arts Atrium, 2013, plastic bags and paint. Photo courtesy of the artist.