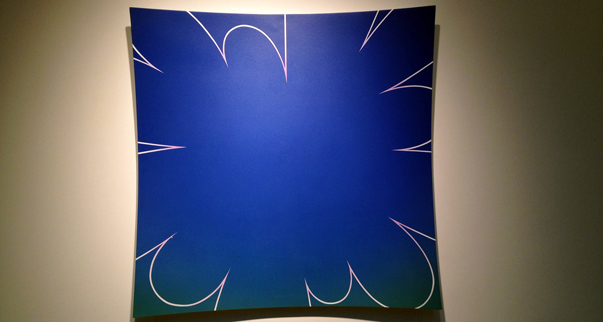 Selections from the Permanent Collection of UCR Sweeney Art Gallery

Transcendent Abstraction in Painting brings attention to Sweeney Art Gallery’s growing permanent collection, alongside the deep photographic collection at UCR California Museum of Photography. The art gallery was established on UCR’s main campus in 1963. It moved to downtown Riverside in 2006 to help form the UCR ARTSblock with CMP and Culver Center of the Arts. Selected works in the exhibition focus on painting and come from gifts by collectors given since 2007 and onward. All of the artists have had a presence in the Southern California art scene since the early 1990s.

The paintings in the exhibition tend to emphasize one of two methods. Some artists employ gestural brushstrokes, whether Lodato’s overlay of thin layers of paint, Dutcher’s use of a brush loaded with paint, creating an impasto effect, or Appel’s application of delicate watercolor, accentuating the hand of the artist in the making of the work. Other artists focus on creating a highly finished work, such as Potter’s use of found film strips, Yek’s airbrush technique, or Eoff’s resin coating, all of which suggest the absence of the artist’s hand in the creation of their own work. The tie that binds the artists to one another is a fascination with examining what defines a painting and also the power of abstract painting to create a transcendent, visual experience.