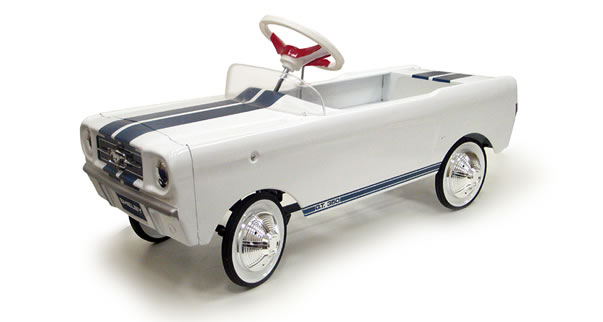 A Selection of Pedal Cars from the David Whitmire Hearst Jr. Foundation Collection


As the automobile industry gained speed so did toys that reflected the public's fascination with these new icons of the industrial age at the turn of the twentieth century. Vehicles of Imagination exhibits many of the varieties of pedal cars that were popular children's toys from the 1890s through the 1970s. Like bicycles, pedal cars were operated by human power, giving children a feeling of power and importance and providing the make-believe that they were operating a real car. Some featured headlights, horns and custom paint jobs, but the pedal car's most important quality was as a vehicle for imaginative play and fantasy. Most were replicas of automobiles, but that soon expanded to include planes, trains, and all modes of internal combustion transportation. The pedal cars in this exhibition, which have been selected from the David Whitmire Hearst Jr. Foundation Collection, are especially elegant examples that both spark the imagination as toys and delight the eye as carefully detailed works of art. These pedal cars are installed in the Atrium of the Culver Center as a unique, site-specific intervention that hangs down from the skylight, heightening the viewer's experience of the magnificent architectural setting and emphasizing the transformative nature of ordinary playthings into vehicles of imagination.

Vehicles of Imagination is curated by Jonathan Green, UCR ARTSblock Executive Director, and Tyler Stallings, Artistic Director Culver Center of the Arts & Director Sweeney Art Gallery. This exhibition is one of four ARTSblock shows that mark the beginning of the fall season and the celebration of the opening of the Culver Center. The others exhibitions are Sweeney Art Gallery's Re:Cycle Bike Culture in Southern California, and UCR/CMP's two shows of work by David Maisel: Library of Dust and History's Shadow.