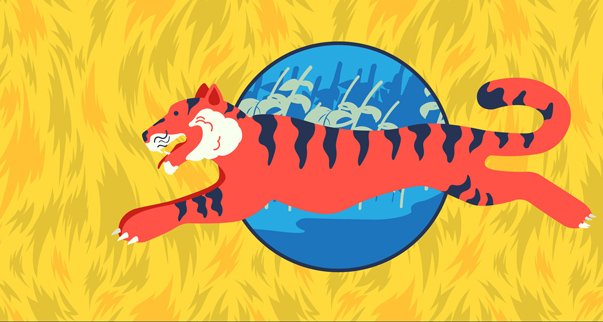 
Free Admission to the opening reception. This work will be presented in conjunction with the exhibition "Second Wave: Aesthetics of the 80s in Today’s Contemporary Art" on view at the Culver Center of the Arts and the Sweeney Art Gallery.

Artist Emilio Santoyo merges the genre of late 19th century equestrian paintings with animal logos made popular by 1980s brand names such as Ralph Lauren and Le Tigre. With design illustrations by Santoyo, Snack Attack features a battle and struggle of the food chain resonating to the competitive forum of commercial and mass media.

Emilio Santoyo received his BFA at Art Center College of Design. His work has been featured at galleries and museums in the Los Angeles region such as Raid Projects, the Japanese American National Museum, Freak City and Slow Culture. In addition, he has been in group exhibitions at venues such as 111 Minna Gallery (San Francisco, CA), ISM Gallery (Long Beach, CA) and Giant Robot (Los Angeles, San Francisco and New York). He lives and works in Los Angeles.

The Culver Center Digital Mural Project 2015-2016 series is curated by Jennifer Frias, Associate Curator, Sweeney Art Gallery at UCR ARTSblock. The Culver Center Digital Mural Project at UCR ARTSblock's Culver Center of the Arts presents a series of changing projects on the two screens inside the façade's glass kiosks that face the pedestrian mall. These projects are an opportunity to extend ARTSblock programming into the public space. UCR's College of Humanities, Arts and Social Sciences (CHASS) and the City of Riverside have provided support.