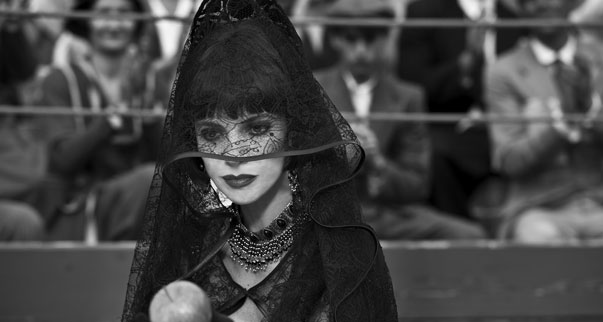 
A twist on the Snow White fairy tale that is set in 1920s Seville and centered on a female bullfighter.

“Blancanieves, or Snow White, is enchantment at 24 frames a second: relocating the Grimm fairy tale to 1920s Spain, adding bullfighting and flamenco dancing, and shooting in silent black-and-white. Pablo Berger’s strange, delightful movie is pure cinema, a demonstration of how much can be conveyed with a paintbrush of light, exquisite framing, and body language. It looks like a forgotten classic, yet it’s fresh as morning. The film’s world and Alfonso de Vilallonga’s rapturous score create a world of sublime magical realism. The story’s Prince Charming is not one we could have anticipated, yet he’s heartbreaking perfection. Most films are experiences to be ignored. Blancanieves is a little classic to be treasured.” - Colin Covert, Minneapolis Star Tribune