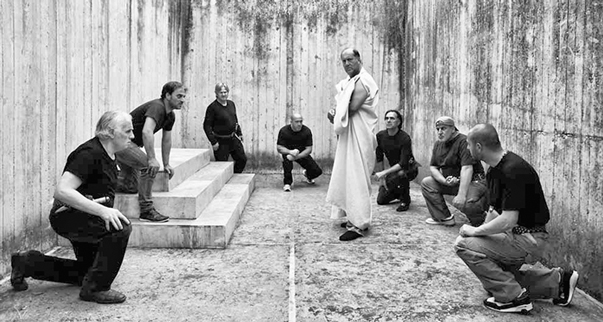 
The theater is Rome's Rebibbia Prison. A performance of Shakespeare's Julius Caesar has just ended amidst much applause. The lights dim on the actors and they become prisoners once again as they are accompanied back to their cells.

"Caesar Must Die ranks among the most involving adaptations of Shakespeare ever put on screen. The film shows us in the starkest terms the electric power of drama to move and touch not only audiences but the actors. What we experience is not just the jolt of watching men who truly understand violence and conspiracy. It's that to see Caesar Must Die is to feel in the largest possible sense that these inmate actors comprehend this play in their bones. Though it would be comforting to believe that being able to act has enlarged these men's lives, the film does not allow us that consolation. Perhaps the most memorable line comes when the prisoner who plays Cassius looks at the camera and says, 'Since I got to know art, the cell has become a prison.'" - Kenneth Turan, Los Angeles Times