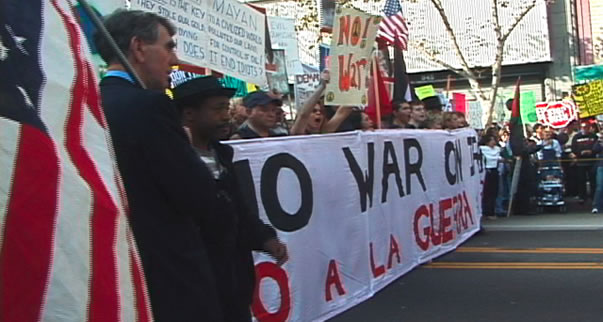 
Erika Suderburg's Decline and Fall is an experimental feature-length documentary about aerial bombing, reconstruction, mass protest, and monumentality. Spanning historical and present day images from Rome, Yucatán, Berlin and Los Angeles this work examines empire; its artifacts, structures and collapse. Through archival footage of the bombing, aerial reconnaissance and rebuilding of WWII Berlin, contemporary footage of a 2.8 million person peace march in Rome at the start of the Iraq war, a neighborhood candlelight vigil in Los Angeles, and stock footage of astronomical events in and around Chichén Itzá in Yucatán, Mexico, this work decomposes the macro and micro movements of destruction, memorialization and everyday life.

A discussion and Q&A follow the screening with curator Tyler Stallings and filmmaker Erika Suderburg. This discussion is then followed by the regularly scheduled Friday/Saturday night film program that begins at 7 PM, so make it a double feature with the Peruvian film, Octubre.