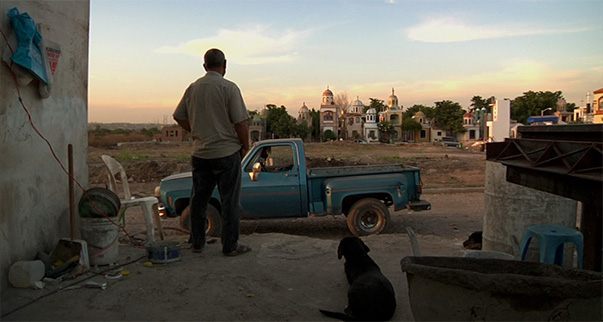 
Natalia Almada's documentary El Velador is the story of the nightwatchman of a graveyard in Culiacán, Mexico. The town, in the northern Mexican state of Sinaloa, is at the heart of the current drug war in the country, and the quiet cemetery in Culiacán serves as a somber reminder of the bloodshed of the past few years.

"El Velador (The Night Watchman) is Natalia Almada's eloquent documentary portrait of a sprawling graveyard in Culiacán, Mexico, in the northwestern state of Sinaloa. The rapidly expanding cemetery has become the burial ground of choice for the country's slain drug lords. Its rows of garish, domed mausoleums topped with crosses may be gaudy eyesores. But in Ms. Almada's calm, nearly wordless reverie, the cemetery, often shown at twilight, looks beautiful. El Velador is a nonviolent film about violence. At night the racket of construction abates as the workers depart, and an ominous silence descends. The watchman going about his rounds might be described as a silent witness to a national tragedy." - Stephen Holden, The New York Times.