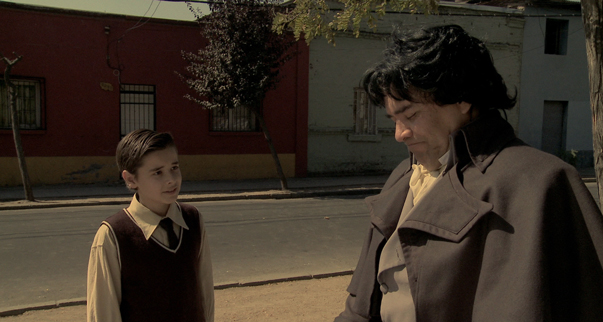 Night Across the Street


On the verge of a forced retirement, Don Celso, an elderly office worker begins to relive both real and imagined memories from his life - a trip to the movies as a young boy with Beethoven, listening to tall tales from Long John Silver, a brief stay in a haunted hotel, conversations with a fictional doppelgänger of a real writer. Stories hide within stories and the thin line between imagination and reality steadily erodes, opening up a marvelous new world of personal remembrance and fantastic melodrama. In this playfully elegiac film, loosely adapted from the fantastical short stories of Chilean writer Herman del Solar, Ruiz has crafted a final masterwork on his favorite subjects: fiction, history and life itself.

"You've been utterly incoherent recently, a colleague remarks to Don Celso (Sergio Hernandez) in Night Across the Street. I've run out of ideas, Don Celso, on the cusp of retirement and perhaps a greater nothingness, replies. This exchange about incoherence may be the most coherent one made in the last of Raul Ruiz's hundred-plus films. Night Across the Street is a characteristic work of surreal wit and circuitousness - and the filmmaker's winking but mournful goodbye. Shot in the months before Ruiz's 2011 death and with posterity heavily in mind, it reveals the multitudes inside Don Celso in pleasurably absurd fragments. These are the dreams of a man stepping out of this world, perhaps never more lucid and full of life." - Michelle Orange, The Village Voice

Selected for the New York and Toronto Film Festivals, 2012