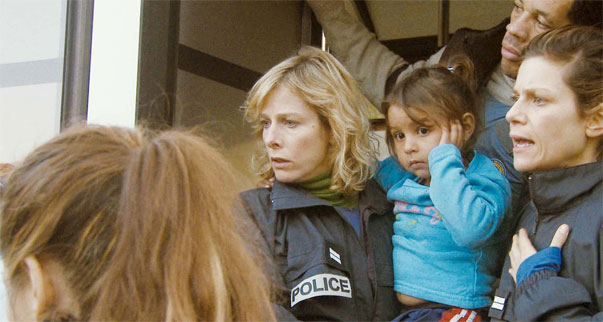 
Polisse follows the day to day lives of the men and women of the Child Protection Unit of the Paris police, as well as that of a photographer embedded with the unit. The film's ensemble cast grapples with crime and bureaucracy, as well as with their own personal conflicts.

"Other cops look down at them, and their home lives are in a shambles. But the members of the Parisian Child Protection Unit in the gripping drama Polisse face their work each day with absolute urgency and love, not to mention gallows humor. Inspired by a documentary, the film is shot with vérité immediacy and beautifully acted. Each incident is based on an actual case involving children and teens who are abused or endangered. Actress-turned-filmmaker Maïwenn ties together the episodic elements with strong emotional threads. Whether it's bureaucratic obstacles, a raped teen's devastating stillbirth, or the unforgettable tantrum of a little boy, agile camera work infuses the action with kinetic power." - Sheri Linden, Los Angeles Times
Winner, Jury Prize for Best Film, Cannes Film Festival, 2011
*Subtitled