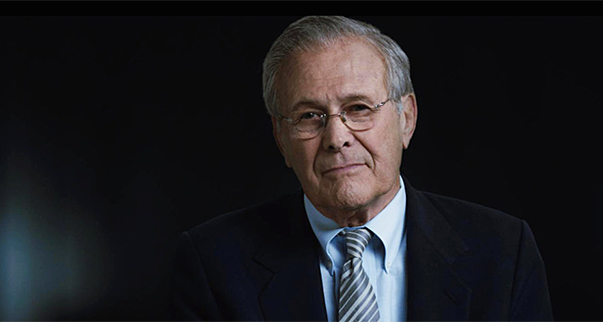 (The Unknown Known will be shown instead of Life Itself)


Errol Morris’ film The Unknown Known is a gripping exploration of the career and philosophy of former U.S Secretary of Defense Donald Rumsfeld. Using declassified memos, Morris guides Rumsfeld through a discussion of his controversial career as a high-level executive under four different Republican presidents. Such absorbing topics as Vietnam, the Cold War, Desert Storm and the War on Terror are all examined through the words of one of America’s most divisive and complex public figures. “The Unknown Known is the work of a masterly filmmaker comfortable in his own groove. By now the director’s technique is so savvy, so confident in its visual layering and atmospheric assurance, even a dodgy, cagey camera subject such as Rumsfeld becomes movieworthy.” Michael Philips, Chicago Tribune.