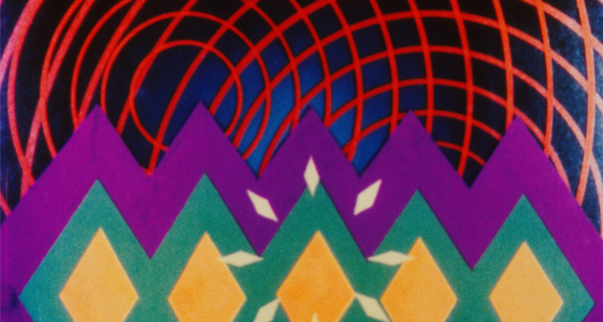 Audiovisual Music explores the convergence of sound and image through different forms and technologies of audiovisual and multimedia composition. This fifth event presents visual music films from the Center for Visual Music archive and is curated by Cindy Keefer, curator/archivist. From handmade sound to hand-drawn animation to psychedelia, this program of revelatory moments from the history of visual music explores legendary and rare treasures found in the CVM archive.

Cindy Keefer is an archivist and curator, and director of Center for Visual Music in Los Angeles. She curates and presents film and media programs and lectures at museums, festivals, universities and archives worldwide.She has published on Oskar Fischinger, Jordan Belson, Visual Music and experimental animation, and edited a new Oskar Fischinger book, Oskar Fischinger: Experiments in Cinematic Abstraction. As Adjunct Faculty, Keefer taught the History of Experimental Animation at Cal Arts, and has been a Guest Lecturer at NYU, ZKM, University of Oxford, Goldsmiths, Cal Arts, UCSB, UCLA, USC and numerous others. She restored and curated Oskar Fischinger: Raumlichtkunst, a 3 screen HD installation which has been exhibited at Tate Modern, the Whitney Museum and other museums in Paris, Australia and New Zealand. Keefer has preserved dozens of short abstract films by artists including Fischinger, Belson, Jules Engel, John and James Whitney, Charles Dockum, Harry Smith, Mary Ellen Bute, Harry Smith, Jud Yalkut, John Cage and others, and produced Fischinger, Belson and Visual Music compilation DVD releases. She has a degree in Film from New York University. She is a member of the Society for Animation Studies, and the Association of Moving Image Archivists (former Chair of its Access Committee).