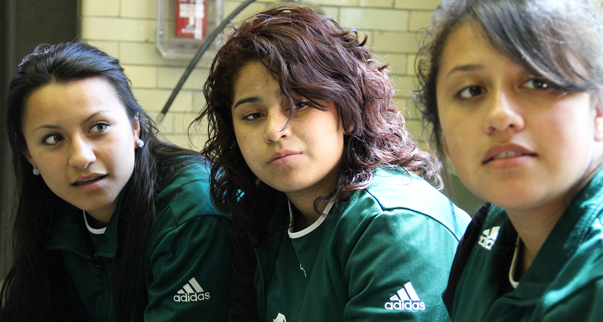 Directed by Peabody award-winner Maria Finitzo and produced by Kartemquin Films (Hoop Dreams), In the Game is a moving, timely documentary that follows the story of the girls’ soccer team at Kelly High School on Chicago’s south side.

Set in the predominantly Hispanic neighborhood of Brighton Park, Kelly High School is an inner city public school struggling to provide the basic necessities for their students, many of whom do not make it to college, either because they cannot compete academically or because their families do not have the financial resources to send them; 94% of Kelly High School students are categorized as “low income.” The girls of In the Game face an uneven playing field - or in the case of the girls at Kelly High School, no soccer field at all - little or no support, problems at home, uncertain futures, discrimination, and poverty, but remain undaunted thanks to their teammates and the dedicated mentoring of their coach, Stan Mietus.

The film follows three girls on the Trojans soccer team - Alicia, Elizabeth, and Maria - as they progress through their school years and beyond. All three seek to enter higher education after graduating high school, but must constrain their ambition due to their families’ lack of financial means. In the Game underlines that in a healthy democracy, equality is defined by who gets to play - both on the field, and off.

This is not a film about the scrappy underdog sports team that through hard work and persistence wins the championship. In this story, the team loses, often. In their personal lives Alicia, Elizabeth, Maria, and Stan all face setbacks and tragedies. But they persevere towards their goals, united and undaunted. This documentary is the story of strong young women and a dedicated coach who uses the game of soccer to teach his players how to face all that life will throw their way, without giving up, without complaints, with grace and with resilience.