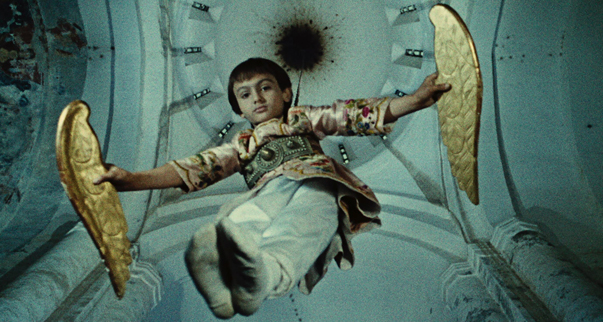 The Color of Pomegranates


A breathtaking fusion of poetry, ethnography, and cinema, Sergei Parajanov’s masterwork overflows with unforgettable images and sounds. In a series of tableaux that blend the tactile with the abstract, The Color of Pomegranates revives the splendors of Armenian culture through the story of the eighteenth-century troubadour Sayat-Nova, charting his intellectual, artistic, and spiritual growth through iconographic compositions rather than traditional narrative. The film’s tapestry of folklore and metaphor departed from the realism that dominated the Soviet cinema of its era, leading authorities to block its distribution, with rare underground screenings presenting it in a restructured form. This edition features the cut closest to Parajanov’s original vision, in a restoration that brings new life to one of cinema’s most enigmatic meditations on art and beauty.

Paradjanov scares up one startling sequence after another, crafting a bizarre mosaic of Nova's world while limiting himself to the materials of the poet's time. - Keith Phipps, AV Club