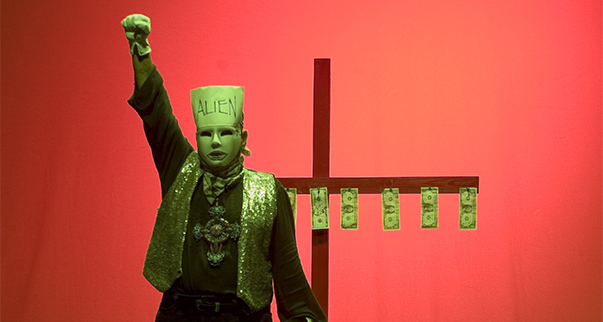 "Since the Pilgrims arrived without papers, why were they not deported?"

Aliens, Immigrants & Other Evildoers is a sci-fi Latino noir solo written by NEA award-winning performance artist José Torres-Tama. Taking Immigration head-on, he satirizes the status of immigrants as “extraterrestrials” through a sci-fi prism informed by comic film shorts, and deftly shape shifts into a variety of “aliens” who expose the hypocrisies of a system that vilifies the same people whose labor it exploits. Considering the recent refugee crisis surrounding Central American immigrants children and the federal court induction on President Obama's Executive Order, this performance serves as a call to action on immigration reform in the U.S.  Aliens... is visually engaging, profoundly moving, politically provocative, strategically comic, and puts a heart and face on the persecuted immigrants of FreedomLandia.

"NO GUACAMOLE for Immigrant Haters!"

Aliens... was developed through a National Performance Network Creation Fund award from the NPN, and commissioned by the Ashé Cultural Arts Center in New Orleans, MECA in Houston, and GALA Hispanic Theatre in Washington, DC.


Presented by Segundo Jueves Latina/o Play Project. Support has been provided by UCR College of Humanities, Arts, and Social Sciences (CHASS) and the City of Riverside