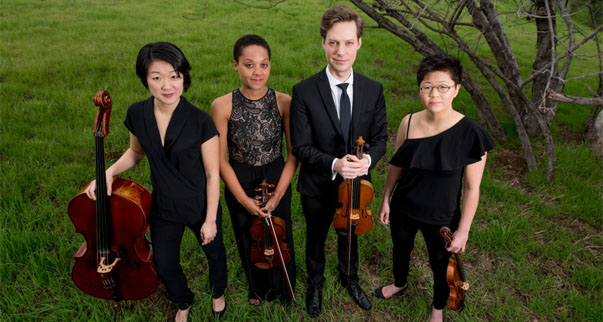 The Argus Quartet was formed in the summer of 2013 and is receiving invitations from concert series throughout the United States and abroad. Recent performances include appearances at Carnegie Hall, Laguna Beach Live!, the Hear Now Music Festival, Music Academy of the West, the Birdfoot Festival, and the Muziekgebouw aan 't IJ in Amsterdam. This season also includes performances with the Bretano Quartet and clarinetist David Shifrin at the Norfolk Chamber Music Festival, the Oneppo Chamber Series, and Carnegie Hall. The Argus Quartet will serve as the Ernst Stifle Quartet in Residence at the Caramoor Center for Music and the Arts during the 2016-17 season.

Argus is dedicated to reinvigorating the audience-performer relationship through innovative concerts and diverse repertoire - connecting with and building up a community of engaged listeners is at the core of the quartet's mission. The quartet also believes that today's ensembles can honor the storied chamber music traditions of our past while forging a new path forward. In that spirit, their repertoire includes not just staples of the chamber music canon but also a large number of pieces by living composers.

Through Chamber Music America and the Caramoor Center for Music and the Arts, Argus has commissioned a number of new works including quartets by Donald Crockett, composer and GRAMMY nominee Eric Guinean, and the 2014 Hermitage Prize winner Thomas Kotcheff. Argus served as the Quartet in Residence at New Music on the Point under the guidance of the JACK Quartet, and was also selected as one of three ensembles to perform works from Kronos Quartet's "Fifty for the Future" commissioning project at Carnegie Hall.

The quartet recently began an appointment as the Yale School of Music's Fellowship Quartet in Residence and is the first ensemble to be mentored by the Brentano String Quartet in that capacity. In addition to their teaching responsibilities at Yale, Argus has worked with students through residencies and masterclasses at James Madison University, Rockport Music, the Milken School, the Young Musicians Foundation, California State University Long Beach, and the Birdfoot Festival.