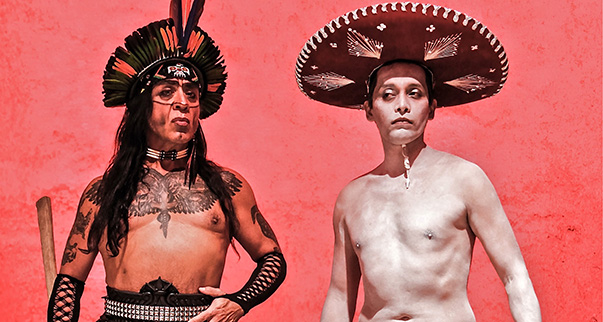 Part of the Mapa/Corpo series


Free admission with reservation.This reservation is considered a place holder only and will be honored up until ten minutes prior to the performance. Remaining guests will be let in on a first come, first serve basis.

In conjunction with the exhibition, Mundos Alternos: Art and Science Fiction in the Americas, UCR ARTSblock presents Ex-Machina 3.0: A psychomagic ritual against violence.

La Pocha Nostra, “the most influential performance troupe of the last 10 years”, is known for its radical interactive performances dealing with issues that equate the human body with the political body and frontally deal with complex gender & ethnic identities, migration, and the politics of new technologies and language.

The central image consists of a shaved nude cyborg body (Balitronica) acupunctured with needles bearing flags of the 40 most insidious corporations affecting the economy, politics and culture of the US and Mexico. This interactive performance challenges the audience to ritually partake in the removal of the flags as a psycho-magic action and a form of imaginary and collective activism. The piece is a re-enactment of a classic Pocha performance originally created as a response to the invasion of Iraq. An additional new image depicts Xochipili the Aztec Godd/ess of Corn, an indigenous body covered with transgenic corn. This daring shamanic action calls for audience to collectively consume the flesh of the corn man as an act of conceptual cannibalism and performance exorcism against colonialism and the violence of our times.

La Pocha Nostra is a transdisciplinary group devoted to erasing the borders between art and politics, practice and theory, and artist and spectator. Founded in 2001, the group has become known for radical interactive performances dealing with issues that equate the human body with the political body, and deal with complex gender and ethnic identities, migration, and the politics of new technologies and language. La Pocha Nostra practices an intense collaboration across national borders, race, gender, and generations as an act of radical citizen diplomacy and as a means for creating ephemeral communities of rebel artists. Ex-Machina 3.0 will be performed by Guillermo Gómez-Peña, Balitronica Gomez, and Saul Garcia Lopez.