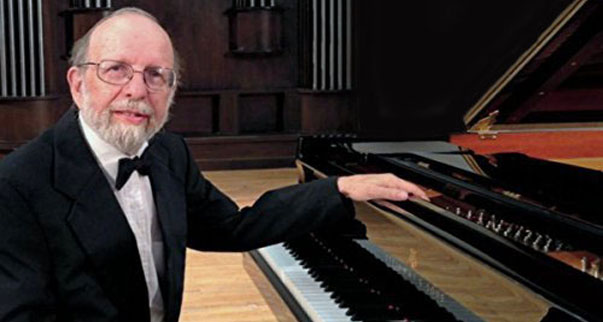 Described by the Warsaw Music Journal as "unquestionably one of the greatest performers of 20th century music," and the New York Times as "an artist of intense concentration and conviction," Jeffrey Jacob received his education from the Juilliard School (Master of Music" and the Peabody Conservatory (Doctorate) and counts as his principal teachers, Mieczyslaw Munz, Carlo Cecchi, and Leon Fleisher. Since his debut with the London Philharmonic in Royal Festival Hall, he has appeared as piano soloist with over 25 orchestras internationally including the Moscow, St. Petersburg, Seattle, Portland, Indianapolis, Charleston, Saõ Paulo and Brazil National Symphonies, the Silesian, Moravian, and North Czech Philharmonics, and recently, the London Symphony and the New Jersey Philharmonic. A noted proponent of contemporary music, he has performed the world premieres of works written for him by George Crumb, Vincent Persichetti, Gunther Schuller, Samuel Adler, Francis Routh, and many others. He has performed solo recitals in London,dublin, Glasgow, Berlin, Cologne, Munich, Moscow, St. Petersburg, Prague, Warsaw, Bucharest, Milan, Madrid, Helsinki, Rio de Janeiro, Saõ Paulo, Havana, Beijing, Hong Kong, Seoul, Taipei, Jakarta, Tokyo, Sydney, Auckland, Toronto, Ottawa, and throughout the U.S.

Mr. Jacob has recorded over 120 works for solo piano and piano and orchestra including his critically acclaimed series of CDs of the complete piano music of Samuel Barber and George Crumb and major works of Bela Bartok. Fanfare Magazine recently devoted a feature article to his series of CDs for New Ariel Recordings entitled "Contemporary American Eclectic Music for the Piano." Additionally, he has made radio recordings for Radio Warsaw, Radio Prague, and Brazil National Radio, as well as a series of recordings of American music for the BBC.

As a composer, he has written four symphonies, three piano concertos, and numerous works for piano and chamber ensemble. Raymond Leppard and the Indianapolis Symphony premiered his Symphony: Winter Lightning. The London Symphony recorded his Symphony No. 3. The Moscow and St. Petersburg Symphonies premiered respectively his Piano Concertos 1 and 2 with the composer as soloist. The Gregg Smith Singers premiered his Sleeping at Last for mixed choose and solo cello. Mr. Jacob's Persistence of Memory was premiered by Convention, and was selected by Charles Ives Center for American Music for a performance by the Charleston Symphony at the 2002 Charleston Spotelo Festival. Other works have been premiered and recorded by the Orquesta de Baja California, the Chamber Orchestra of the Rhein, the North Czech Philharmonic, the Cavani Quarter and sopranos Mary Messenger and Laurel Thomas. Two CDs of Mr. Jacob's orchestral music have been released by Centaur Records and Vienna Modern Masters, and recordings of individual works appear on several labels including Albany, Opus One, Capsonte, and New Ariel. Currently Emeritus Professor at Saint Mary's College, Notre Dame, Indiana, he recently received the Artist of the Year Award from the International New Music Consortium at New York University for his work as composer, pianist and educator.