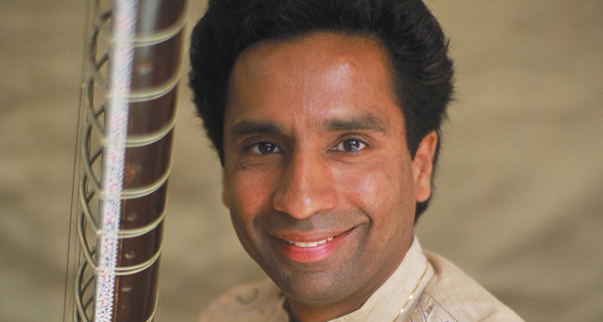 
Join us for an evening of enlightenment with internationally renowned sitar virtuoso, Kartik Seshadri. Seshadri is a world-renowned force in the field of Indian Classical Music. As a sitarist, he attracted widespread attention when he began performing full-length solos at the age of 6 in India. The sitar prodigy blossomed into a musical powerhouse, whose performances drew praise world-wide for their rich tonal sensibilities and exciting rhythmic intricacies. The foremost disciple of Grammy-winning composer and sitar maestro Pandit Ravi Shankar, Seshadri emerged as an outstanding representative of the present generation of Indian classical music, playing the sitar with expressivity, artistry, and grace. The prestigious British magazine Songlines declared, Seshadri "stands out amongst sitarists for his clarity and intricate rhythmic sensibility". The publication selected the sitar guru's 2004 Raga: Rasa - That Which Colors the Mind album for its World Music Top 10 list and cited his 2006 Illuminations record as "sitar at its lyrical best".

Seshadri's relentless touring and continued success now make him one of the most sought after soloists collaborating with high-profile composers like Philip Glass and performing in major venues throughout the world. A distinguished composer, his Quartet for a Raga was premiered under the auspices of the Contemporary Music Forum in Washington D.C., while his latest "Concerto #1 for Sitar and Chamber Orchestra" received its world premiere last October in San Diego. He is also an educator, heading one of the largest programs of Indian Classical Music in the USA at the University of California, San Diego.