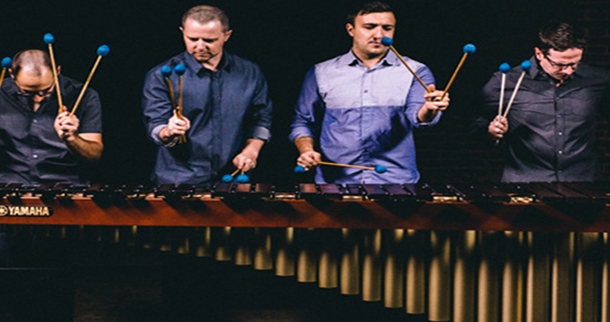 Since 2009, the GRAMMY-nominated Los Angeles Percussion Quartet (LAPQ) has forged a distinct identity as a world-class contemporary chamber music ensemble that is dedicated to commissioning and presenting new works for percussion quartet. Originally, members Nick Terry, Matt Cook, Justin DeHart, and Cory Hills joined together to create a classical percussion ensemble that would champion the important contributions of 20th century West Coast composers while collaborating with local artists to continue the tradition of innovation and exploration. Today, the group continues their mission while broadening creative output through recordings, performances, and educational outreach.

LAPQ's partnership with Sono Luminous Records has contributed some of the most dynamic and realistic recordings of percussion music to date. Rūpa-Khandha, LAPQ's seminal album recorded at Skywalker Ranch in Marin, CA, pioneered a new level of sonic achievement in 2012 as the first 7.1 surround-sound high-fidelity recording of percussion chamber music. The quartet's recorded performance was praised by Neue Musikzeitung for presenting "the entire color-spectrum of global percussion instruments intelligently and with great competency," while Percussive Notes hailed LAPQ's commitment towards "championing composers of thought-provoking and uncompromisingly intelligent music." The album won multiple nominations in the 55th GRAMMY Awards, including the prestigious category of Best Chamber Music/Small Ensemble Performance. In 2014, LAPq released their second surround sound album with Sono Luminous Records, entitled The Year Before Yesterday, featuring works by Shaun Naidoo, Eric Griswold, Nick Deyoe, IsaacSchankler, Joseph Pereira, and PAS Hall of Fame member William Kraft. The album was hailed by the New York Times as "mesmerizing," with "colorful, atmospheric and...supremely melodic music."


Support has been provided by UCR College of Humanities, Arts and Social Sciences (CHASS) and the City of Riverside. Curated by Ian Dicke.