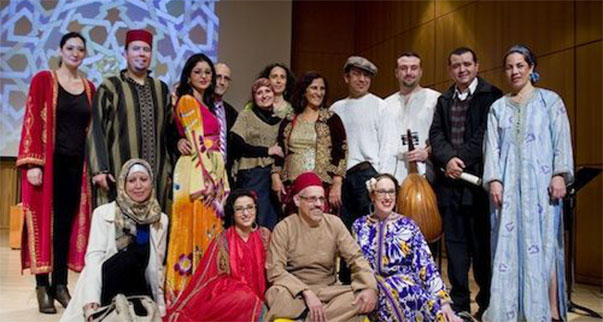 An evening of Jewish, Christian, and Muslim music from medieval Iberia, presented by the New York Andalus Ensemble. This group is dedicated to sharing with the world the illustrious musical traditions of the Iberian Peninsula and North Africa. This diverse group of singers and instrumentalists performs songs in Arabic, hebrew, Spanish, and Judeo-Espagnsole that conjure the cosmopolitanism of Córdoba.

Samuel R. Thomas, artistic director, nay, oud, vocals, and bendir: Thomas is an ethnomusicologist and performer who has been forging an artist/scholar model for over fifteen years. His work centers on musics of the Middle East and North Africa, Jewish musics, and jazz traditions. Thomas is a lecturer at several campuses of the City University of New York, in music, interdisciplinary studies, and cultural studies, on topics including Muslim-Jewish confluences in music, philosophy, and poetics, American popular music, and diaspora studies. He is the artistic director of the New York Andalus Ensemble and the critically-acclaimed ensemble ASEFA.

Sjimon den Hollander, vocals: den Hollander was born in the Netherlands in 1960. He has two master's degrees - in Arabic and Islamic Studies - and is currently enrolled in Yeshiva University's rabbinical program. He teaches and lectures on the subject of Jewish-Muslim interaction in theology and philology, on Arabic language, and on Judeo-Arabic philosophy.

Khadidja Guendil, vocals: Guendil, born in Oran, Algeria, was raised listening to the various musical traditions of her homeland. Guendil studied music with her uncle, violinist/composer Djamel Benyelles, who influenced her connection to traditional Andalus music. She moved to New York City in 2007 to finish her bachelor's degree in corporate communication. Guendil sings in Arabic, Hebrew, and Spanish, and works on pronunciation techniques for ensemble choir performance.

Brandon Terzic, oud: Terzic, from Akron, Ohio, has been playing oud for twenty-three years. He has traveled and studied widely, in the Middle East and North Africa, performing in several different musical traditions from the region. He is bandleader of the Xalam Project, and works as an oud instructor in New York City.

Eylem Basaldi, violin: Turkish-born violinist: Basaldi was on the classical track at New England Conservatory when, twelve years ago, she took a class in Turkish folk music and rediscovered the sounds of her youth. She began pursuing her a love and passion for Mediterranean musical cultures, and now performs in a wide array of settings featuring Balkan, Middle Eastern, North African musical traditions. She is an instrumental instructor in New York City and travels widely as a performing artist in the United States, Europe, and the Middle East.

The New York Andalus Ensemble is dedicated to sharing with the world the illustrious musical traditions of the Iberian Peninsula and North Africa. This diverse group of singers and instrumentalists performs songs in Arabic, Hebrew, Spanish, and Judeo-Espagnole that conjure the cosmopolitanism of Córdoba.