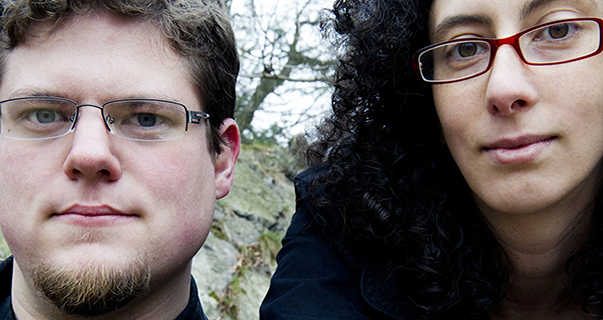 Praised by the Boston Globe as "superb", the dynamic bass clarinet/marimba duo Transient Canvas (Amy Advocat, bass clarinet & Matt Shamrock, marimba) has been blazing its own trail in the world of contemporary music since 2011. In under five years, they have premiered over 60 new works, essentially creating an entirely new repertoire for their unique instrumentation. Fearless in their programming and hungry for new collaborations, TC has performed anywhere from microbreweries to Jordan Hall and actively seeks out new composers who will stretch their instrumentation to its limits.

Transient Canvas performs almost exclusively works written for them. Their mission is to provide a blank slate or canvas for composers to explore while simultaneously making bass clarinet and marimba a new standard ensemble. They have worked with a wide variety of composers, including well established artists such as Marti Epstein, Curtis Hughes, John McDonald and Andy Vores and emerging voices such as Victoria Cheah, Perter Van Zandt Lane, Adam Roberts, and Tina Tallon.

Dedicated to spreading their repertoire, Transient Canvas has performed across the United States. Their 2014-15 season included a featured performance on the closing concert of the first annual New Music Gathering at the San Francisco Conservatory, a shared recital with pianist Taka Kigawa not the Firehouse New Music Series in Brooklyn, and a collaborative concert with Chamber Cartel and the artwork of Igor Korsunskiy at the Goat Farm Arts Center in Atlanta. In their hometown of Boston, they have featured performers with the Equilibrium Concert Series, the Fifth Floor Collective, Opensound, and the innovative new Original Gravity Concert Series which pairs local composers with local beers at Aeronaut Brewing Company.