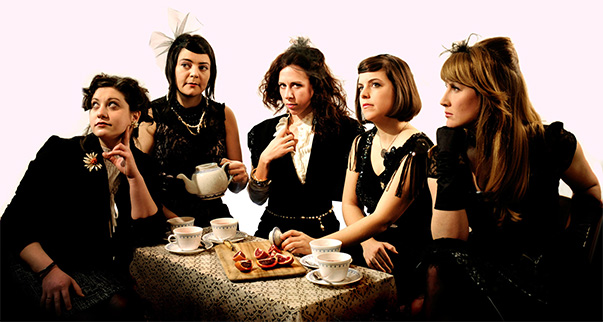 VICTOIRE, a Brooklyn-based band founded by composer Missy Mazzoli, has been dubbed an "all-star, all-female quintet" by Time Out New York. This quirky ensemble combines strings, clarinets, keyboards and lo-fi electronics (including samples of sewing machines and answering machine tapes) to create their "minimalist, post-rock bliss". Victoire is as much a child of composer Philip Glass as of instrumental post-rock ensembles Godspeed You! Black Emperor, and Sigur Rós. They've been making waves in New York\'s downtown music scene for several years. Members of Victoire have performed at BAM, Carnegie Hall, Lincoln Center, and other prestigious venues around the world. Their debut album, Cathedral City, released on New Amsterdam Records was the hit-darling of 2010, making several top-ten lists including NPR?s best classical album and The New Yorker\'s most memorable album lists.

Unique to Victoire\'s west-coast concert at the Culver Center is an exciting collaboration with UCR MFA dance students who will channel the free-spirited ensemble\'s waves of sound in live performance. Their conceptualized choreography will provide a seamless conversation of movement matching the tone, structure, and imagery of Victoire\'s immersive and imaginative soundscape.