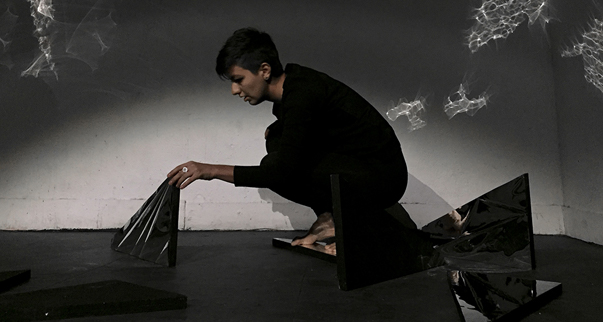 Part of the performance series “Geometry of Exile”


Free and open to the public

In the performance Border to Landscape, artist Nooshin Rostami invites the public to re-embody the artist’s journey as an immigrant experiencing exile. Throughout the performance, a border is fragmented into triangles and gradually moved by the artist and the participating audience to the other side of the room. The triangles, initially arranged as a straight line on one side of the gallery, can only be moved following a given set of rules. The result is a shifting landscape of negative spaces made even more elusive through the triangles’ reflective surfaces. The performance is over when all the triangles have been displaced and put together at the opposite end of the gallery. The performance is organized in conjunction with the exhibition Exile: The Land of None-Belonging.

Nooshin Rostami’s work examines the impact of displacement as physical, emotional, and psychological conditions. Through a metaphorical construction and a game-like problem-solving process, she creates abstract spatial landscapes. As a multidisciplinary artist, Rostami works predominantly in performance, installation, and sculpture where she mutates abstract forms into an amalgam of objects, constituting personal, social, and political narratives.

Nooshin Rostami (born in Shahroud, Iran) is a New York-based interdisciplinary artist and educator. She grew up in Tehran and immigrated to the United States to pursue her graduate studies and, so far, has been unable to return to her home country. Her work has been widely exhibited in solo and group exhibitions in Austria, Canada, Germany, India, Iran, Italy, Mexico, Spain, and the United States. She has participated in residencies both locally and internationally, including the BRIC Contemporary Art Program, NARS Foundation, and Tifa working studios.