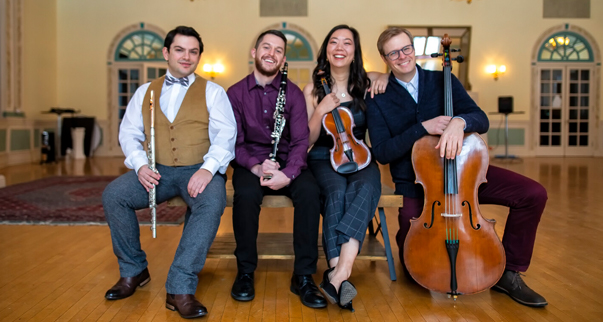 
Unfortunately, this concert has been cancelled due to COVID-19 concerns. We apologize for the inconvenience.

Hub New Music brings its passion for adventurous and relevant programming to global audiences as both a quartet and as collaborative artists. Recent projects include Terra Nova with composer/songwriter collective Oracle Hysterical; The Nature of Breaking, a 30-minute collaborative work with composer/harpist Hannah Lash; and a choreographed production of Robert Honstein’s Soul House with Boston’s Urbanity Dance. Upcoming projects include Requiem for the Enslaved, an evening length mass by Carlos Simon supported by Georgetown University’s GU272 Project that honors the lives of 272 African American slaves and their descendants; a new ‘modular’ work by Sō Percussion’s Jason Treuting; and new works by composers Nina C. Young, Nathalie Joachim, and Laura Kaminsky.

For its visionary programming, HNM was named one of WQXR’s “10 Cutting-Edge Artists that Have Captured the Imagination” in 2016, and has been featured in major press outlets including the Boston Globe, New York Times, WFMT (Chicago), The New Yorker, WBUR (Boston), Houston Chronicle, and several others.