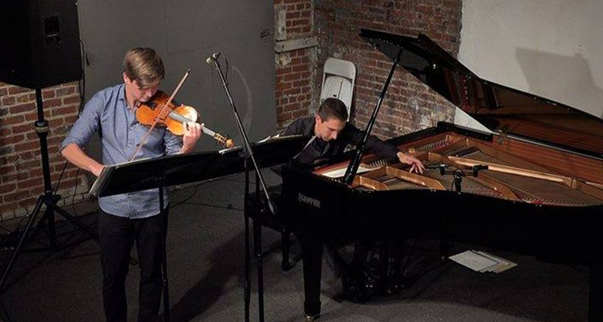 Panic Duo is a Los-Angeles based ensemble dedicated to the performance of music of our time. Featuring violinist Pasha Tseitlin and pianist Nic Gerpe, the Duo’s performances of contemporary music have been described as “exciting”, “virtuosic”, and “irresistible”. Engaging audiences into unfamiliar music through a combination of dialogue and uncompromising musicality, Panic Duo has brought a variety of repertoire to audiences since 2009.

Recent performance highlights include a featured concert on the People Inside Electronics series, including the World Premiere of Anne LeBaron’s Fissure, for violin, piano and electronics, which was commissioned by the Duo. The Duo also gave a concert of World Premieres of works for violin and piano by the composers’ collective Improvisatory Minds, a group dedicated to chamber music written by jazz musicians and consisting of Gernot Wolfgang, Michael Patterson, Ed Neumeister and Bevan Manson. The Duo has performed on the Los Angeles-based new music concert series Tuesdays at Monk Space, and have been featured on the Sundays Live series at the Los Angeles County Museum of Art.

Panic Duo have performed at venues including Leo S. Bing Theater at LACMA, the California Center for the Arts, Thayer and Newman Halls in Los Angeles, California State University Los Angeles and Classical Encounters Foundation, and were the artists in residence for the 2013 New Lens Concert Series.