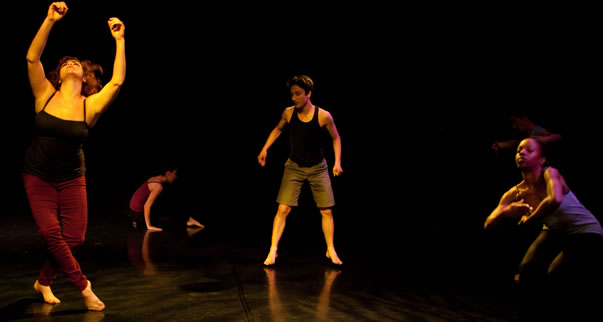 
solo project, directed by Sue Roginski, is a highly collaborative work documenting the creation of six solos for Megan Fowler, Chloe Freeman, Marvin Rivas, Rosa Rodriguez, Kijai Salimu, and Alexis A Weisbrod. Improvisation and set choreography are woven together as the six soloists incorporate "in the moment" compositional elements in order to invite the audience into this particular process. Puncturing the preciousness of the choreographer's role while simultaneously honoring that role, Roginski hands over much of the project's crafting to the performers. Live music by Gabriel Hartman of Shoppy accompanies the work as performers move throughout the downstairs space at Culver Center of the Arts in Riverside.

Sue Roginski, is a teacher, choreographer, and performer, residing in Riverside, California. She graduated in 2007 from UC Riverside with an MFA in Dance. During the past few years, she has had the opportunity to perform and present work at Highways Performance Space (Santa Monica), Society of Dance History Scholars (conferences '08 and '09), Anatomy Riot (LA), AB Miller High School (Fontana), Unknown Theater (LA), The Haven Caf? and Gallery (Banning), UCR Dance Department?s "Back Track Dance" (colloquium series'10), Mt. San Jacinto College, and Riverside City College. Sue has been improvising with Susan Rose and Dancers since 2005, and will travel to NY and Boston with the company this June. She teaches dance at MSJC, RCC, and Norco College, and recently embarked on the creation of P.L.A.C.E. Performance Co-op with friend and colleague Julie Freeman. This particular collective works to provide space, place, and possibility for dancers and choreographers in the Inland Empire.

Sue Roginski is currently a Body, Performance & Dance (byped) Research Platform Fellow at UCR. BYPED offers a space for experimentation, collaboration, and reflection among scholars and artists engaged in critical investigations of dance and the moving body. http://byped.ucr.edu/