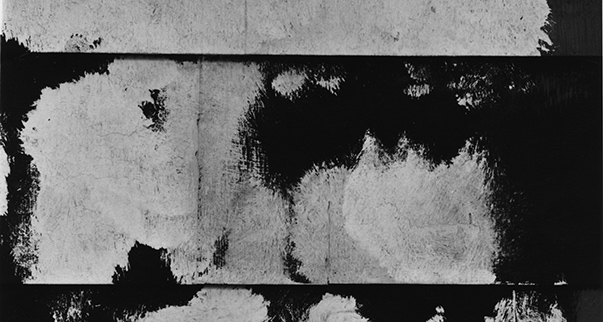 
At 1:30pm on Thursday, October 29, artist John Divola, Professor of Art at UCR, will reflect on Siskind's work in conversation with exhibition curator Kathryn Poindexter. The gallery talk is free and open to the public. This exhibition and others will be celebrated during ARTSblock's fall reception on Saturday, November 14.

Mined from the collection of the California Museum of Photography, Aaron Siskind: Pleasures and Terrors draws from six decades of the seminal artist’s career. Siskind’s photographic beginnings took place in the 1930s as a member of the New York-based Film and Photo League, a socially and politically conscious organization that sought to document urban life in New York in the midst of the Great Depression. Within a decade he would migrate toward a photographic sensibility simultaneously defined as radically abstract and concretely representational. Frequently taking on closed in shots of hand painted signage, politically-fueled graffiti, and weathered urban surfaces as his subject matter, Siskind is most known for his mythic compositions that at times bear a striking resemblance to the work of important twentieth century Abstract Expressionist painters.